By Office of the Press Secretary to the Mayor - September 03, 2020
City residents will have an opportunity to review the proposed detailed design and provide feedback for bike lanes designated along eight corridors throughout the city. Due to COVID-19, the sessions will be held virtually from Thursday, September 3 thru Thursday, September 17. To view the detailed design and get instructions for submitting input, go to: https://www.rva.gov/public-works/pedestrian-bicycling-and-trails   Several months ago virtual meetings were held for review of the concept for the project. The detailed design is the result of more than 800 responses received from those who attended and submitted ideas for these locations:   ·       Allen Avenue from Colorado Avenue to Leigh Street ·       Belmont Avenue from Chesterfield County Line to Walmsley Boulevard ·       Broad Rock Road from Belt Boulevard to Forest Hill Avenue / Bainbridge Street ·       Fairfield Avenue from N. 26 th Street to Cool Lane ·       Fairmount Avenue from Mosby Street to 25 th Street ·       Fo
Read more 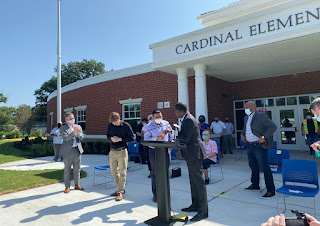 After a tour of the new Cardinal Elementary School, Mayor Levar Stoney was joined by Superintendent Jason Kamras and members of the Richmond School Board and City Council to present keys to the principals of Cardinal Elementary, Henry Marsh Elementary and River City Middle.   The three new schools were funded using revenue from the 1.5 percent increase in the meals tax that the Stoney administration proposed to pay for badly needed school infrastructure improvement.   That meals tax increased passed Richmond City Council with seven votes in 2018.   The mayor thanked the Richmond community for eating at local restaurants, which ultimately paid for the new schools.   “This is a community investment,” said the mayor. “And it represents our shared belief that no matter their zip code, family income, race, religion, gender identity, ethnicity, first language or learning style, every single student in RPS deserves the same opportunity to learn in a healthy, safe environment.”   Once studen
Read more 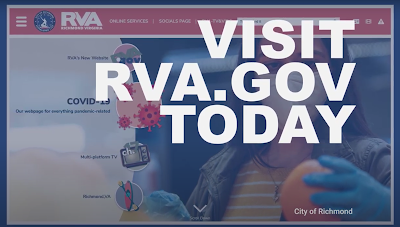 Click here for video content of the mayor introducing the   site The City of Richmond is in the third week of a soft launch of the new municipal web platform, RVA.gov, the first new official web presence in the city in more than 15 years.     “In the 21 st  Century, a helpful, intuitive and innovative website is a key step in making sure local government is responsive to its citizens,” said Mayor Stoney of the site.    With the launch of RVA.gov, Richmond is now one of only two cities in the country with a three-letter URL, alongside New York City with NYC.gov. The short URL is easier to remember and refer residents to, making the site more accessible. All content can be translated into 36 different languages.   The city’s new platform differs markedly from the current site, richmondgov.com, both in appearance, accessibility, capacity and functionality. RVA.gov features mobile compatibility, an automated content management system, Global Information System integration (GIS), video on
Read more
More posts