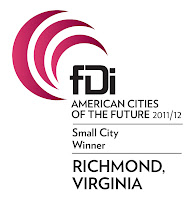 Mayor Dwight C. Jones today accepted the Foreign Direct Investment (fDi) magazine Best Small American City of the Future award for the city of Richmond, during the fDi American Cities of the Future 2011/12 awards ceremony in Washington, DC. Joining the Mayor in accepting the award was city’s Deputy Chief Administrative Officer of Economic and Community Development Peter Chapman, city’s Director of Economic and Community Development Lee Downey and the President and CEO of the Greater Richmond Chamber of Commerce Kim Scheeler. Mayor Jones said, “This is a timely award as it not only reassures us that we are moving in the right direction, it also validates the recent CNBC ranking of Virginia being the top state in the nation to do business. It is a reflection of the dynamic local economy of Virginia’s capital city, as we have embraced economic development as a core foundational service and we are committed to maintaining an international focus.” “It also bears emphasis that our urb
Read more
More posts