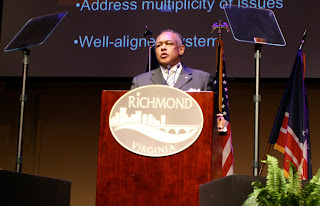 On Thursday, February 3, Mayor Jones delivered his second State of the City Address to hundreds at Jackson Ward's Hippodrome Theater. Address highlights included the development of an outcomes-based budget for the upcoming fiscal years, improving the city's aging infrastructure, continuing work to revitalize neighborhoods, reducing poverty, and a new emphasis on tourism.Click here to read the Mayor's speech.Click here to watch the video of the State of the City Address.

By Office of the Press Secretary to the Mayor - February 02, 2011
~City would be proactive in adopting ordinance to deal with the potential of private liquor stores~

The purpose of the ordinance is to distinguish “retail sales of liquor” from other retail stores, to require a conditional use permit in certain districts, and to establish specific conditions to the operation of such stores. The conditional use process is specifically designed to promote neighborhood review and input, through the conduct of public hearings by the Planning Commission and City Council.

The proposed ordinance would have a three-part approach: 1) defining “retail sales of liquor” to distinguish it from other retail stores, and distinguishing it from the sales of other alcoholic beverages (such as beer and wine, which are not changed from their current status b…
Read more
More posts