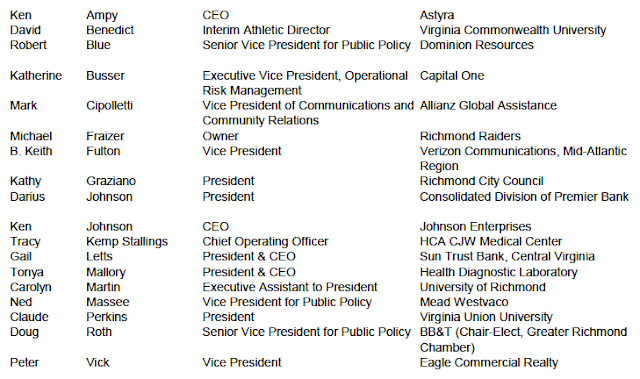 Mayor Dwight C. Jones today announced members of his Steering Committee to advise him on the opening of the Washington Redskins’ Summer Training Camp in the city of Richmond, beginning in 2013.  The committee will look at the team’s criteria for a facility, existing state-of-the-art facilities, potential locations in the City, financing, and strategic partnerships. Members of the Steering Committee are: “There has been a tremendous response from the community about the Redskins’ summer training camp coming to Richmond in 2013,” said Mayor Jones, “Having the Redskins in Richmond builds on the great base of support in Central Virginia for the team, and it capitalizes on the city’s growing sports enthusiasm.  I want to thank those named to the Steering Committee today for their willingness to devote their time and energy to making this a reality!”   Bruce Allen, Executive Vice President and General Manager of The Washington Redskins, stated, “We appreciate all the fan suppor
Read more

By Office of the Press Secretary to the Mayor - June 18, 2012
On June 14, 2012, the City of Richmond successfully sold $248.2 million in bonds to include $101.3 million in continued funding for the City’s $500 million multi-year Capital Improvement Program (CIP). CIP projects include the construction of four new schools, a new Justice Center, street and sidewalk projects, and various other improvements to City buildings and infrastructure. In addition, $146.9 million of existing bonds will be refinanced at lower interest rates, producing $12.9 million in savings. The various series of bonds included $7.5 million of Qualified School Construction Bond proceeds issued at a net zero percent interest rate to finance a portion of the construction costs of the new Martin Luther King, Jr. Middle School.     The nine firms of the underwriting team that sold the bonds was led by Citigroup, Wells Fargo and BB&T Capital Markets, and also included three minority-owned underwriting firms, Seibert Branford & Shank, Jackson Securities and M. R. Bea
Read more
More posts