Minority Business Development in the City

A recent audit report (August 30) done by the City's Auditor suggests that operationally, the Office of Minority Business Development (OMBD) needs to make some improvements. The City plans to continue to improve upon having an inclusive agenda and appreciates the Auditor and the City Council supporting the City's efforts to include minority businesses in the economic opportunities that the City generates. Even though areas where the office needs to be improved were highlighted, the audit report indicated that "OMBD has made a positive changed in minority participation" and "there has been a steady increase in spending with minority subcontractors since FY 2008." The report also states that the "number of minority subcontracts receiving payments has increased" and shows that the City has increased the universe of those firms doing business with the City of Richmond. In just a few short years, City spending with minority business has increas
Read more 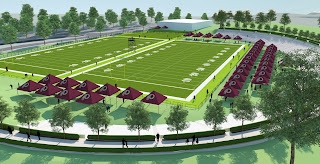 With the month of August coming to a close, the Mayor’s Redskins Summer Training Camp Steering Committee followed through as anticipated with final site recommendations for the location of the training camp in Richmond beginning in 2013. The Steering Committee has recommended City Stadium and Leigh Street (more commonly known as the Science Museum site) as two viable sites for the Mayor’s consideration. The Steering Committee first convened on June 29, 2012, and indicated at that time that recommendations would be coming forth by the end of August. The intense eight-week review process was led by Steering Committee Chair Mike Fraizer. Mayor Jones stated, “Mike Fraizer has clearly been our quarterback for this review process. He has led us down the field and gotten us into scoring position by bringing forth these two viable recommendations.” Various site evaluation criteria were examined during the review, including football operation’s needs; the fan experience; development con
Read more
More posts