By Office of the Press Secretary to the Mayor - September 25, 2020
On Wednesday, Mayor Stoney announced that he will recommend part of the city’s projected surplus balance fund a pilot program dedicated to addressing mental health and substance abuse disorder challenges in underserved communities.  The city will work alongside the Richmond City Health District (RCHD) and Richmond Behavioral Health Authority (RBHA) in designing and implementing this pilot.  “Richmond residents who live with mental and behavioral health challenges are experiencing compounded harms during the pandemic,” said Mayor Stoney. “But this program should not be limited to short-term relief. We need a permanent culture shift to destigmatize seeking help.” The year-long pilot aims to increase the accessibility of mental and behavioral health support in communities that suffer from disparities in care and outcomes. Director of RCHD Dr. Danny Avula asserts this begins with listening.  “Our intention with this program is to listen to the community and use that input to define the sc
Read more 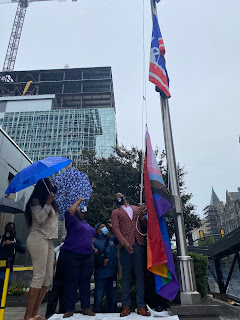 Mayor Stoney and LGBTQ advocates raised a Pride flag at city hall to recognize the city’s annual PrideFest weekend.   “LGBTQ Richmonders should know that this city stands behind them,” said Mayor Stoney. “No matter who you love or how you identify, you are a valued member of our community deserving of love, support and justice.”   This is the first time in the city’s history a Pride flag has been raised at City Hall. The flag flies on the Broad Street side of the complex in recognition of the city’s annual PrideFest weekend.      The city chose to raise the Progress Pride flag. The flag incorporates black and brown stripes and the colors of the Transgender Pride flag to represent the necessity for champions of the LGBTQ community to bring a racial justice, inclusive lens to the work.     “We chose the Progress Pride flag both for this moment and to represent our ongoing work,” said Mayor Stoney. “To build an equitable, inclusive city, we must move forward with intentional intersectio
Read more

By Office of the Press Secretary to the Mayor - September 24, 2020
Click here to read the full report On September 23, 2020, the Task Force to Reimagine Public Safety presented Mayor Levar Stoney with their initial recommendations after 45 days of discussing actionable proposals to make Richmond a safer city for all residents.   “ After meeting with the co-chairs of the Task Force to Reimagine Public Safety and co-chairs of each of the subgroups, I am in consensus with their recommendations,” said Mayor Stoney. “They propose systems-level changes for the undeniably systemic challenges we face. The members are pushing our city in the right direction when it comes to broadening the definition of public safety and innovating our policies and programs accordingly.”   “ I appreciate the comprehensive feedback and suggestions of this group of experts and community members,” said Chief of Police Gerald Smith. “Their attention to current policies and practices and innovative reform suggestions are a welcome starting point.”   The membership of the task forc
Read more

Funding will enable the development of 10,000 new units in the city Mayor Stoney announced today that he will introduce an ordinance to Richmond City Council to establish a dedicated funding stream to the Affordable Housing Trust Fund (AHTF).    The dedicated funding from the city will leverage other affordable housing funding from state and federal governments to make possible the creation of 10,000 new, quality affordable housing units over the next ten years, a central tenet of the city’s Equitable Affordable Housing Plan.  “When every resident of Richmond is securely housed, then every resident of Richmond will truly be able to call this city home,” said the Mayor. “A dedicated funding stream will enable this vision and empower the city to address our spectrum of housing needs.” Currently, it is incumbent on the sitting mayor or council to ensure an allocation to the AHTF is in the budget. The Stoney administration has embraced this opportunity to fund Richmond’s affordable housing
Read more
More posts