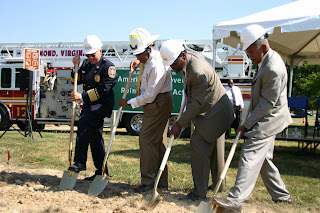 ~City building first fire station in more than 20 years~ Mayor Dwight Jones joined State Senator Henry Marsh, Chief Administrative Officer Byron Marshall and Fire Chief Robert Creecy today in breaking ground on a new Fire Station No. 17 in the city’s Southside. “We want this and every city fire station to be part of your neighborhood. Fire protection is a community interest, and this fire station is going to be a community station, a gathering place for the community,” said Mayor Jones. “I’ve stated on numerous occasions that I want Richmond to grow by design and not by default. Within the past year, we have broken ground on two new schools with two more to come, agreed to build a new City Justice Center, and now we are building a new fire station.” Funding for the new fire station includes $1.4 million from the City’s Capital Improvement Plan and an additional $3.5 million from the American Recovery and Reinvestment Act. The new 3-bay, single story facility will have 11,35
Read more
More posts