Funding will enable the development of 10,000 new units in the city

Mayor Stoney announced today that he will introduce an ordinance to Richmond City Council to establish a dedicated funding stream to the Affordable Housing Trust Fund (AHTF).

Currently, it is incumbent on the sitting mayor or council to ensure an allocation to the AHTF is in the budget. The Stoney administration has embraced this opportunity to fund Richmond’s affordable housing supply, increasing allocations nearly 300% from FY17 to FY21. Mayor Stoney’s most recent budget allocated $2.9 million for the AHTF.

If Mayor Stoney’s ordinance passes City Council, then the dedicated funding stream would stabilize annual allocations, establishing a funding floor, not a ceiling.

Under the proposal, the future tax revenues from properties leaving the real property partial tax exemption rehabilitation program will go directly to an AHTF special fund to build new affordable units. In short, as properties are phased out of tax-exempt status, the Finance Department would direct that new revenue to the AHTF.

“This funding mechanism is unique: this is new revenue not pulled from any other priority, without creating a new tax,” said Deputy Chief Administrative Officer for Community and Economic Development Sharon Ebert. “A growing pot of dedicated revenue every year, combined with state and federal support, will make our plans for equitable and affordable housing options in Richmond a reality.”

The administration anticipates that this will result in $2 million in revenues in FY22, growing by approximately $2 million each year for the next five years. Therefore, in FY2026, the revenue to the AHTF will be an unprecedented $10 million.

The mayor also announced that the administration will introduce the city’s Equitable Affordable Housing Plan at the September 28 meeting of Richmond City Council.

At the beginning of his term, Mayor Stoney set a goal of breaking ground on 1,500 new units of affordable housing by 2023. By the end of 2020, the administration will have surpassed that goal by nearly 500 units, three years ahead of schedule. 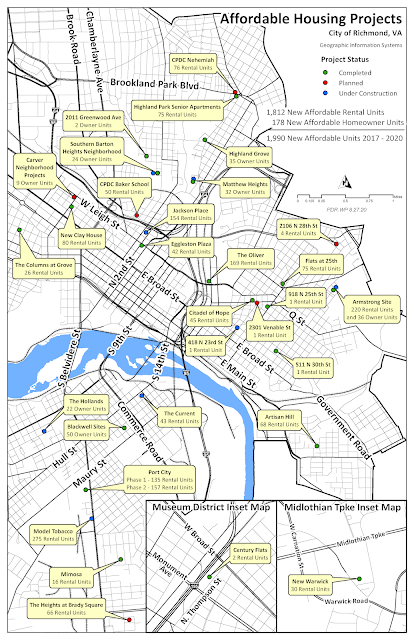 Said Mayor Stoney: “Our track record shows Richmond is capable of providing quality, affordable housing for the housing insecure, the houseless and newcomers to our city. Now, we must move forward intentionally and creatively, addressing a broad spectrum of housing need with the support of a dedicated funding stream.”

Though the plan will not be released until the meeting, the mayor publicly previewed key policies and programs proposed in the plan, including:

- Lobbying for and adopting inclusionary zoning ordinances for the City of Richmond and Commonwealth of Virginia;

- Amending the zoning ordinance to reflect an inclusive and compassionate city by replacing the City-sponsored Cold Overflow Shelter with a network of year-round shelters and allowing religious institutions to shelter those experiencing homelessness without time limits;

- Launching “Land for Lodging” initiative for non-profits to acquire city-owned land at a nominal cost to develop affordable housing; and

The key outcome of the plan is the creation of 10,000 quality affordable housing units over the next 10 years that address the city’s spectrum of demonstrated housing need. This includes units specifically designed for those experiencing homelessness, residents with special needs, neighbors facing displacement due to gentrification, residents who earned between 50 percent and 80 percent of annual median income (AMI) that want to pursue homeownership, residents earning less than 50 percent AMI, and Richmonders currently living in substandard public housing units, apartments and mobile home units.

Councilwoman Robertson and Council President Newbille have been tireless advocates for housing quality and affordability throughout the city. They will be co-patroning the ordinance to establish a dedicated funding stream.

Said Councilwoman Ellen Robertson: “Having a dedicated source of funding and an ongoing committed revenue stream is critical for the Affordable Housing Trust Fund because the demand for affordable housing in Richmond exceeds the supply. I’ve been keen on seeing the source come through, and we are continuing to make progress with this stride and making housing affordability a priority in the City of Richmond. I’ve said it over and over again, and I’ll continue to: we must have plans in place that speak to equitable, stable housing. It is central to the health and well-being of all families, and we must address the systems that hinder that progress.”

Said Council President Newbille: “Establishing a dedicated source of funding for quality affordable housing cements it as a top priority for the City of Richmond. With this ordinance, we’re funding that vision.”