By the end of February, developers and property-owners will have the option of contracting with a registered 3rdparty to perform building plan reviews and inspections 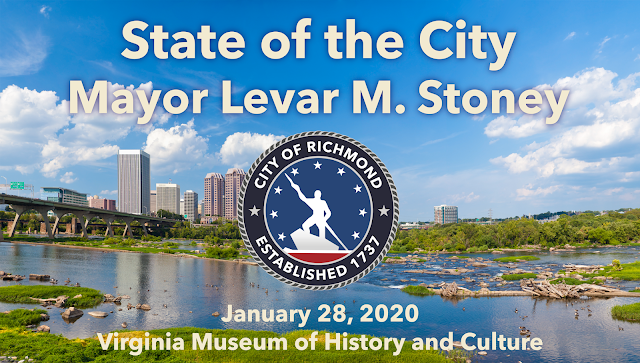 In his annual State of the City address, Mayor Stoney declared Richmond a can-do city, highlighting three years of progress and accomplishment and laying out his vision in the coming year for One Richmond investments and initiatives to make Richmond the most inclusive, equitable and competitive city in the nation.

“The state of our city is stronger and more competitive than it’s been in years,” the mayor said. “This is our time, our chance, our opportunity to realize our potential to work together to empower others,” he said.

The mayor shared his upbringing as the son of a returning citizen who struggled to make ends meet for his family and a student who grew up on free and reduced lunch, saying he feels a duty as mayor to be a voice for the voiceless.

“A compassionate government must be in the business of lifting people up, not writing them off,” the mayor said during remarks at the Virginia Museum of History and Culture on Thursday.

“I want everyone to feel that sense of community and support here in the city of Richmond. Each and every day, we are taking positive steps to be the city we want to be.”

The mayor highlighted some of the many accomplishments of his administration in 2019 and over the past three years. He charted Richmond’s progress in doing the “blocking and tackling” of city services.

Before 2017, the city frequently filed its Comprehensive Annual Financial Report (CAFR) late. Since 2017, the mayor’s administration has completed every CAFR on time, and the tax collection rate has increased to 97 percent, the highest in 25 years.

The City of Richmond Eviction Diversion Program has prevented 76 individuals and families from losing their homes since October and are on track to meet the goal of diverting between 300 and 500 evictions within a fiscal year. After highlighting the success of the program, the mayor recognized the members of the Eviction Task Force, which is tasked with addressing the root causes of and solutions to Richmond’s housing crisis.

The mayor also noted the city’s plans to continue building One Richmond through initiatives in housing, investments in transportation, and steps to ensure a quality education and workforce empowerment.

City on track to surpass goal of 1,500 housing units under construction by the end of 2020

In 2018, Mayor Stoney and his administration set a goal of increasing the number of housing units that are affordable by 1,500 by the year 2023. The lofty goal was a response to the increasing demand for housing in a growing city as well as a dearth of housing suitable for vulnerable groups, namely low-income families, veterans, people living with disabilities, the elderly and teens and children living in foster care.

In the speech, the mayor announced that the city is on track to exceed its goal of 1,500 units, with 1,628 units completed or under construction by the end of 2020. Those units will range in area median income from 30 percent to 80 percent, ensuring a variety of affordability levels from below the poverty line to city workforce housing.

In the coming weeks, the city will release its Affordable and Equitable Housing Strategy. The plan will create housing opportunity for renters, homeowners, and those seeking to become homeowners through tools such as tax abatement and zoning reform, tax deferral programs for very low- and low-income homeowners and housing rehabilitation programs.

Parks and green space play a central role in the quality of life and livability of cities, providing recreational space, exposure to nature and protection from the heat. However, Richmond currently only uses six percent of its land for parks and recreation, compared to the national average of 15 percent. As a result, 51,000 residents of Richmond live further than a 10-minute walk to a park.

To address this disparity, Parks, Recreation and Community Facilities, the Mayor’s Office and community partners will join forces with the ultimate goal of identifying 10 pieces of city-owned land to be converted into green spaces. In phase one of this project, the mayor’s “Green Team” will identify and design five potential parcels of land.

The city will partner with leading area experts such as Jeremy Hoffman, Chief Scientist at the Virginia Science Museum, to focus on areas that have proven to be disproportionately vulnerable to climate change while also applying an equity lens, prioritizing areas that have been historically overlooked.

Says Mayor Stoney: “We will also work closely with these communities to ensure that the green space is designed in a way that meets their needs. This will be a community effort.”

Mayor Stoney announced that, in 2020, the city will launch Richmond’s first-ever Office of Children and Families, designed to establish citywide goals and evaluate and improve the services provided to children and those who care for them in the City of Richmond. The office will work in partnership with other city agencies and Richmond Public Schools to reduce redundancies and ensure that Richmond is the very best place to grow up and raise a family.

“My administration believes that thriving children are the product of thriving families. The Office of Children and Families will be our north star, setting direction for the entire city so that we collectively support our families and together lead our children to one destination: a happy, healthy adulthood, no matter their neighborhood or background,” said Mayor Stoney.

The office will be housed within the Human Services portfolio, and its director will report to the Deputy Chief Administrative Officer for Human Services, Reggie Gordon. Its creation is part of a broader effort to reorganize Human Services to be more person-centered and responsive to community needs.

Construction investment in the city has doubled in the past 3 years to approximately $1 billion in 2019.  And while that is a good thing for our growth, the result has been that some have had difficulty in obtaining plan reviews, building permits, and inspections.

By the end of February, the city's Bureau of Permits and Inspections will initiate a Third-Party Plan Review and Inspections Program that will give developers and property owners the ability to contract directly with qualified,third-party inspection agencies to perform building plan reviews and building inspections in a timely manner.

The program allows contractors and property owners to rely on qualified, registered third-party professionals to perform building plan reviews and building inspections in a timely manner. This will alleviate lengthy wait times, benefitting both residents and the efficiency of the department.

“The important thing is that when we encounter a bump in the road, we don’t let it knock us off our course. We focus on the fix,” said the mayor. “We commit ourselves to the work of problem solving, not problem seeking.”

In the address, the mayor also indicated support for various pieces of legislation proposed by members of the Richmond delegation to the Virginia General Assembly.

He endorsed House Bill 1541, which creates the Central Virginia Transportation Authority, calling it “a game changer” for the city. Also on the topic of transportation, the mayor thanked Richmond City Council for unanimously passing his proposed ban on using handheld devices while driving, legislation that is up for debate in the General Assembly this session.

He also used the platform to reflect on the city’s public safety progress and advocate for the passage of commonsense gun laws in the General Assembly, calling on the Commonwealth of Virginia to follow Richmond’s lead. In 2019, Richmond passed both a restriction on firearms in public parks and municipal buildings and a reporting requirement for lost or stolen firearms.

At Monday’s City Council meeting, the administration introduced a resolution to hold school funding harmless throughout the construction period of the project, addressing concerns that the funding for Richmond Public Schools would be negatively affected by the downtown redevelopment. Additionally, HB1345 would shrink the increment financing area from 80 to 11 blocks, or by 86 percent.

The mayor closed the speech by calling on Richmond’s leaders to listen to the residents who want good jobs, good roads, strong schools and access to affordable housing and support the restructured Navy Hill proposal.

The issue, he said, is for Richmond to have confidence in the city’s potential.

“If we truly want the change we need, we have to believe in ourselves,” said Mayor Stoney. “And we have to have faith that we can do something great for this city. It is time we have faith, not fear, and move our city forward in a direction that benefits ALL Richmonders.”

“I will not quit, I will not rest, until we have built the most welcoming, inclusive, equitable and competitive city in the entire country,” the mayor stated.

“After three years, I know, Richmond CAN.”

A copy of the mayor’s remarks as prepared for delivery can be found HERE.