By Office of the Press Secretary to the Mayor - December 22, 2011
The City is initiating a new multi-pronged program called Project Clean Move. It is designed to keep neighborhoods clean and help students, landlords and property owners during student relocations. Project Clean Move encourages students to get an early start in planning their move and seeks to educate and bring awareness about laws related to illegal dumping and trash accumulation as well as recycling efforts. The program begins on January 1, 2012. The Department of Public Works is working with The Salvation Army, Central Virginia Foodbank, Central Virginia Waste Management Authority, Virginia Commonwealth University and the Fan District Association on Project Clean Move to provide information on available resources, such as recycling locations and places to donate clothing and non-perishable food. The Department of Public Works will continue to put roll-off dumpsters in neighborhoods near Virginia Commonwealth University in six week intervals, beginning in late April and again i
Read more

Mayor Dwight C. Jones and 9 th District City Councilman Doug Conner today announced recommendations to improve the City’s emergency preparedness and response strategies. The Office of Emergency Management, under the leadership of Emergency Management Coordinator Anthony McLean, has been working with Councilman Conner since Hurricane Irene in August to identify areas where the City can enhance the overall emergency response efforts for residents during an emergency. Today’s report reflects the results of that review. “It is the responsibility of government to ensure the safety, health and well-being of the residents it serves in any given situation, commented Mayor Jones. “While City workers did a good job in responding to Hurricane Irene, in any disaster there is always room for improvement. I want to thank Councilman Doug Conner for working so closely with us to undertake this review of our emergency response efforts and to help ensure that we capitalize on all lessons learned.”
Read more 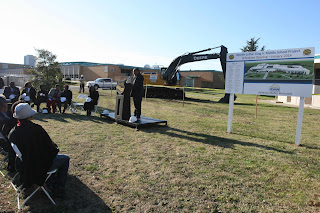 Mayor Dwight C. Jones kicked off the demolition of Martin Luther King, Jr. Middle School today in preparation for the construction of a new, state of the art, Martin Luther King, Jr. Middle School (MLK). Mayor Jones, joined by Superintendent of Schools Dr. Yvonne Brandon, MLK Principal Valerie Harris along with City Council members and School Board Members from the 6th and 7th districts, watched as an excavating machine took a chunk out of one of the buildings that will come down. “Today is a clear indication of the progress that we’ve made toward building new schools,” said Mayor Dwight C. Jones. “With the start of our construction today, we are on our way to opening this new school in January of 2014.” The Jones Administration has broken ground on two new elementary schools since taking office and today’s action was the first taken on a new middle school. A new high school is also planned. MLK was originally constructed in 1964. Mayor Jones listed out the amenities the new s
Read more
More posts