By Office of the Press Secretary to the Mayor - November 20, 2015
On November 17, 2015, the City of Richmond successfully issued $85.8 million of taxable and tax-exempt series of bonds, which were sold by competitive bid. Seven bids were received for the $62.8 million Series 2015B bonds, with Bank of America Merrill Lynch winning the bid. Seven bids were also received for the $23.0 million Series 2015C bonds, with Robert W. Baird & Co., Inc., winning the bid. Reporting before the Finance and Economic Development Standing Committee today, the City noted that investor demand for the City’s bonds was considerable and that the bonds sold with a lower than expected interest rate, saving money for the city. The City received an interest rate of 3.83% on its taxable bond issuance, over 1.25% lower than initial planning rates. The longer term tax-exempt series received a 3.16% interest rate. The bonds sold will be used to finance spending related to general capital improvements for Stone Brewery as well general capital improvements in the City’s Capit
Read more 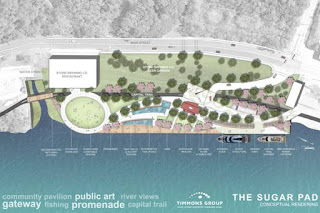 The City of Richmond has announced plans to move forward with improvements to the Intermediate Terminal/Intermediate Wharf – a City-owned parcel that fronts the James River on the East side of the city. Providing increased public access to the riverfront is one of the goals in the City’s adopted Riverfront Plan. Improvements to the Intermediate Terminal Dock are seen as especially timely with the completion of the Virginia Capital Trail – 52 miles of continuous multipurpose trail between Williamsburg and Richmond. A structural stabilization project has been underway in the Intermediate Terminal area since August of this year. With the completion of that stabilization nearing in early Spring of 2016, the City is ready to move forward with broader plans for improving riverfront access in that area, to include passive and active Riverfront recreational opportunities. Conceptual plans for the development of the area include the possibility of a community pavilion, an event lawn, an in
Read more

By Office of the Press Secretary to the Mayor - November 16, 2015
The Richmond Public Library, the Office of Community Wealth Building and Richmond Public Schools (RPS) have partnered to create RVA Reads to improve literacy in the city by improving access to books in low income homes of preschool children. RVA Reads is designed to expand or create home libraries for three and four year olds, increase the time parents and children read together and engage children and families in library services. The program provides one book a month to hundreds of pre-k children participating in the Virginia Preschool Initiative. To introduce the books each month, community volunteers visit pre-k classrooms to lead fun, interactive readings with the students. These readings take place at the RPS preschool centers at Blackwell, Maymont and Mary Scott schools as well as the Martin Luther King, Jr. Preschool Learning Center. Members of the City Administration and parent volunteers will lead the next reading event at the Martin Luther King, Jr. Preschool Learning Cente
Read more
More posts