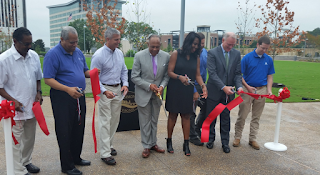 Early on Tuesday, September 20, Mayor Dwight C. Jones, along with the City's Department of Parks, Recreation & Community Facilities, in association with Enrichmond, helped kick off the Grand Reopening Celebration for Kanawha Plaza. The renovation process of the public space began in July of 2015, and the ribbon cutting event marked the completion of the first phase of the renovations. The City invested $2.9 million in the renovations. Kelso & Easter, Inc., of Richmond was the contracted designer and the Contractor was Southwood Building Systems, Inc. of Virginia. The renovations that were undertaken include the retention and repair of the plaza's fountain, the parks most prominent feature. There were also landscaping improvements, a new food truck area, and improved lighting. The City welcomes this improved public green space and thanks everyone that helped achieve the enhancements.
Read more
More posts