Showing posts from November 4, 2012
Show all

By Office of the Press Secretary to the Mayor - November 09, 2012
~Paving Projects Totaling $1,426,000 Million Begin This Month~ The City of Richmond Department of Public Works announced the continuation of city paving projects to take place throughout the month of November and into December. Paving work totaling $1,426,000 million, which begins on Monday, November 12, supports the City Administration’s commitment to improving the city’s infrastructure. Mayor Dwight C. Jones announced an aggressive infrastructure improvement effort in 2010 to repave 25 percent of neighborhood streets over a five year period. The following projects should be completed by mid-December. The project areas are: North Richmond 11/12/12–11/21/12  Brook Road between Brookland Park Boulevard and Lombardy Ave The Fan Streets 11/19/12 – 12/21/12 Grove Avenue between Park Avenue to the Boulevard Floyd Avenue between Cherry Street to the Boulevard Hanover Avenue between Park Avenue to the Boulevard There will be intermittent lane closures and/or street closure
Read more 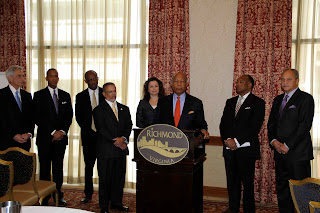 Mayor Jones welcomes dignitaries and college presidents as panelists   The City of Richmond is hosting the “Framing the Issues and Looking to the Future” Health Care Symposium on November 8-9, 2012, in the city’s downtown. The symposium will focus on the health care delivery system in the city of Richmond, with a goal of engaging the broader community in dialogue about ways to attract and retain health care practitioners to live and work in the city. “This symposium is an outgrowth of the work of the Mayor’s Blue Ribbon Commission on Health Policy,” said Mayor Jones. “That Commission highlighted the need for us to identify ways to add to our health care infrastructure in the city of Richmond. With this symposium, we are going to explore ways to encourage physicians to locate practices in the city of Richmond and we are going to consider what incentives we may be able to offer to spur interest in targeted areas of our city.” "There is a long-standing shortage of min
Read more
More posts