Showing posts from September 2, 2012
Show all 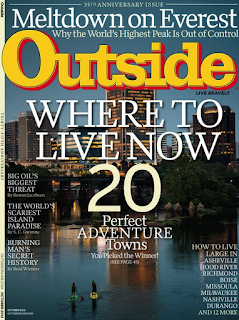 After a four-week-long competition which was held on Facebook, Outside Magazine  has announced Richmond, VA as the winner of the title “best river town in America.” This means that since Richmond was named the “ Best Town Ever ,” it was placed on the cover of Outside’s October 35th anniversary issue .  Richmond received 9,315 votes and won over the other nine competitors, including: Hood River, Oregon; Nevada City, California; Milwaukee, Wisconsin; Asheville, North Carolina; Nashville, Tennessee; Boise, Idaho; Missoula, Montana; Durango, Colorado; and Ithaca, New York. Outside, with a print circulation of about 700,000 and a total audience of more than 2 million, has featured outdoors towns and cities annually for over 15 years.
Read more
More posts