By Office of the Press Secretary to the Mayor - August 14, 2020
Click here to access the interactive map At a press conference today, Mayor Stoney announced that residents of the City of Richmond could visit nearly 50 locations around the city to pick up disposable surgical face masks free of cost.     The City of Richmond Fire Department, Office of Citizen Service and Response and Mayor’s Office teamed up to ensure every resident of Richmond has access to an effective, free mask. Residents can pick up masks at many community locations, such as Richmond Public Library Branches, Parks and Recreation Community Centers and Richmond City Health District Resource Centers.   “Wearing a mask is the easiest way to show love and respect for your neighbor,” said Mayor Stoney. “Masks are scientifically proven to help stop the spread, so we’re making sure everyone has access to them, regardless of the money in their pocket or zip code they live in.”   Under this new program, customers can access two new requests in RVA311: an individual request for masks and a
Read more 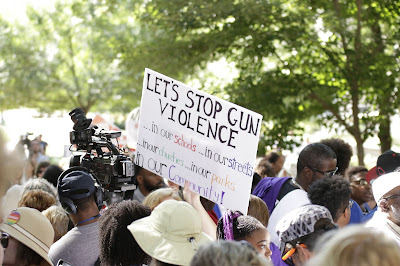 At the August 10 meeting of the Richmond City Council, the Stoney administration introduced an ordinance to modify current Richmond City Code section 19-334.1; Carrying Firearms in Certain Places. Currently, the code bans firearms in city-owned and -operated parks and facilities. The newly introduced ordinance would also prohibit the possession, carrying or transportation of any firearms in any public street, road, alley, sidewalk, public right-of-way or any open public space when it is being used by, or is adjacent to, an event that requires a city permit.    This ordinance does not broadly ban firearms in these public spaces. Rather, it bans firearms when a permitted event, or an event that should be permitted, is taking place.   The expansion to the existing ordinance is intended to promote the health and safety of event attendees and city residents as a whole.   “The City of Richmond proudly hosts hundreds of public events each year, but I believe it’s in the interest of everyone’s
Read more

By Office of the Press Secretary to the Mayor - August 10, 2020
The City of Richmond has recommended that City Council allocate $500,000 to create the Business Recovery Grant Program. Under this new, one-time program, grants will be awarded to eligible local businesses, non-profit organizations, and commercial property owners to recover costs from damage during recent demonstrations within city limits.   “Though many protests have been peaceful, sporadic nights of severe property damage have hurt our small business community,” said Mayor Stoney. “These grants will help those establishments get back on their feet and send a message to the owners and employees of those businesses that they’re heard, they’re valued and we’re in this together.”   The grants will be a reimbursement of expenses paid to repair property destruction during the recent civil unrest.  This could include window repair, graffiti removal and more. The maximum grant award is $10,000 for a single commercial property address.   The city’s Commercial Area Revitalization Effort (CARE)
Read more
More posts