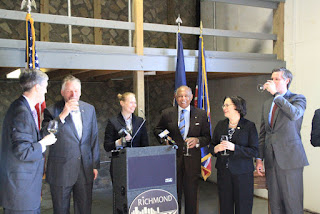 Blue Bee Cider announced on February 18 that it will relocate and expand its cidery into the old city stables in Scott’s Addition, and will invest more than $1 million to renovate the historic property. The company also plans to expand its existing orchard, bringing agriculture back to Richmond, and purchase over $250,000 worth of Virginia-grown apples and berries from Virginia farmers over the next three years. Gathered in front of a crowd of cider enthusiasts, Mayor Dwight Jones, Governor Terry McAuliffe, Virginia Secretary of Agriculture Todd Haymore, and Courtney Mailey, owner of Blue Bee Cider, all spoke about the new venture. “I am extremely pleased that Blue Bee Cider has chosen to not only remain in the city of Richmond, but expand its operations here at this unique and historic property in the heart of the dynamic Scott’s Addition neighborhood,” said Mayor Dwight C. Jones. “In addition to manufacturing a product that uses Virginia and Richmond resources, Blue Bee will be a ne
Read more
More posts