By Office of the Press Secretary to the Mayor - August 02, 2013
The City of Richmond has launched an innovative model designed to promote employee health and wellness while at the same time providing some much needed support to Richmond Animal Care and Control (RAC&C). The program, called Walk-A-Hound, Lose-A-Pound, is part of the City of Richmond and Richmond Public Schools Employee Wellness Program and provides a mechanism for city employees to help shelter dogs get regular physical activity. “An active lifestyle is vitally important to the overall health of our city,” says Mayor Dwight C. Jones. “I welcome this new walking program to encourage our employees and residents to become more active, and be able to enjoy the outdoors with a great walking companion from Animal Care and Control.” The dogs that are walked are all up to date on shots and have been behavior tested. While the program is directed toward city employees, friend and family can join them for their scheduled walks. City employees can volunteer to walk the dogs for an
Read more

By Office of the Press Secretary to the Mayor - July 31, 2013
Click and Park now available to schedule parking for Fan Appreciation Day The City of Richmond today issued an updated parking lot schedule for the remainder of the Washington Redskins Summer Training Camp season. A variety of parking options have been offered to Redskins fans for a flat fee of $5 for lots within walking distance, or $7 if a roundtrip shuttle is included. “We are pleased that patrons visiting the city have found ample parking opportunities, as it was our intent to ensure there would be adequate parking available for NFL Fans visiting Richmond,” said Lynne Lancaster from the city’s Department of Public Works. “A review of our operations since the beginning of Training Camp has led to a revision in our plans for parking lot use and shuttle services. We are able to scale back on some lots and to redirect resources to those lots that we believe will gain the most usage.” The revised plan eliminates parking and shuttle service at City Stadium for the upcoming
Read more

By Office of the Press Secretary to the Mayor - July 31, 2013
Richmond Mayor Dwight C. Jones will preside at the ribbon cutting ceremony for the first of its new Compressed Natural Gas (CNG) fueled buses. The ceremony will be held at 11:15 am, Thursday, August 1, 2013, at the GRTC Transit System Maintenance Facility located at 301 East Belt Boulevard. Among honored guests will be a representative of the Virginia Department of Rail and Public Transportation. Immediately following the ribbon cutting ceremony, the Mayor will board the first GRTC bus fueled by CNG for its maiden trip, on a route which will deliver him to City Hall. In 2011, the Mayor’s Office met with GRTC officials about the benefits of transitioning the bus fleet to CNG fueled vehicles as retired buses are replaced. The benefits included significantly reduced fuel costs, improved air quality, and reduced noise pollution. GRTC initiated the procedure to replace vehicles, as they are retired from the fleet, with new CNG fueled vehicles for both its paratransit and fixed rou
Read more

By Office of the Press Secretary to the Mayor - July 30, 2013
~Names initiative after Maggie L. Walker~ Mayor Dwight C. Jones announced today that the Mayor’s Anti-Poverty Commission will be called the Maggie L. Walker Initiative for Expanding Opportunity and Fighting Poverty . The Mayor named the initiative today at a press conference mapping out the way the work of the Commission will be organized going forward. “The Maggie L. Walker Initiative will honor the social and entrepreneurial legacy of this homegrown hero,” said Mayor Jones. “Our work, in honor of one of Richmond’s great historical figures, is being done in hopes of reviving Maggie Walker’s legacy of person-centered community economic development and empowerment.” Mayor Jones spoke about the implementation plan to move the work of the Anti-Poverty Commission forward. Task forces consisting of key administrators in each policy area, issue experts, and nonprofit and business stakeholders will develop specific implementation proposals to specify what is to be done, who is t
Read more 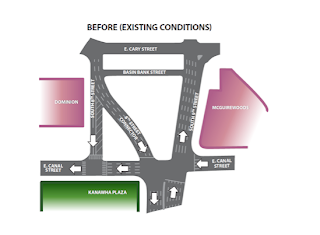 ~ Traffic Conversions will happen in three phases~ Motorists in Downtown Richmond should prepare for pending changes in traffic patterns as work gets underway for the $110 million Gateway Plaza building. The project encompasses a city block bounded by 8 th and 9 th Streets to the east and west and Canal Street to the south.   Road modifications must begin before construction on the building can start.  Staging and preparation began on Thursday, July 25, however motorists will not notice an immediate impact.  The work is scheduled as follows:  Phase I (3 weeks) 8 th Street Connector remains open, but reduced to 3 lanes Construction of median strip at intersection of Canal and 9 th begins New eastbound lanes established on Canal Street Northbound 9 th Street reduced from 5 to 4 lanes from Canal Street to Cary Street to accommodate tower construction. Install striping on South 8 th Street to move to Phase II Install temporary signs and signals on Canal Street at
Read more
More posts