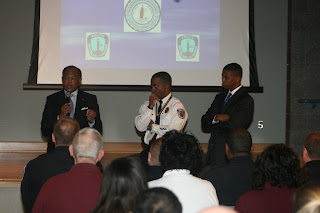 Overall, crime was up last year in Richmond – by 1 percent – compared to the same statistics for 2010. This slight increase was driven by property crimes, which were up by 2 percent. However, there was a significant reduction in violent crimes, with homicides and commercial robberies leading the decline, down 10 percent and 14 percent, respectively. Aggravated assaults also were down 3 percent. Rapes generated the only increase, up 16 percent from 43 in 2010 to 50 in 2011. “Violent crime, and crime in general, is down in Richmond because the residents and police officers have joined forces to combat the criminal element,” said Mayor Dwight C. Jones. “The police cannot and have not done it alone. It takes all of us, as stakeholders, working together.” “I am particularly pleased with the drop in violent crimes, which was even better than last year’s historic low,” said Chief Bryan T. Norwood. “However, despite our success in this area, there’s still work to do – in particular
Read more
More posts