By Office of the Press Secretary to the Mayor - March 18, 2011
Mayor's Order #2011-3 WHEREAS by the authority vested in me as Mayor of the City of Richmond I do hereby create the Anti-Poverty Commission; and WHEREAS under this authority, the Anti-Poverty Commission is hereby established to develop strategies to address poverty that have demonstrable results for increasing employment and educational attainment, improving transportation, and enhancing healthy communities for Richmond residents; and WHEREAS the City of Richmond seeks to identify the root causes of poverty in the City and develop policies designed to address these causes; and WHEREAS according to the US Census 2009 American Community Survey, 22.1% of Richmond residents are below the poverty threshold set by the Federal government, compared to 7.2% average for the Commonwealth of Virginia; and WHEREAS the US Census 2009 American Community Survey reports the median household income for residents of the City of Richmond as $37,735, while the median household income
Read more 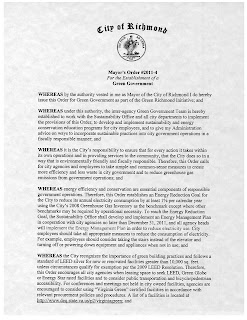 By Office of the Press Secretary to the Mayor - March 14, 2011
Mayor's Order #2011-2 WHEREAS by the authority vested in me as Mayor of the City of Richmond I do hereby create a Commission on Pension Liability Assessment; and WHEREAS there is currently a great deal of focus nationally, and within Virginia, on the pension liabilities of major public pension funds; and WHEREAS it is paramount that the City of Richmond keep its promises to its employees in regard to their pension benefits; and WHEREAS pension liabilities represent a significant potential liability to the City and its taxpayers, with the City contributing over $40 million per year into our retirement system – a number that will exceed $45 million by FY 2012-13; and WHEREAS the Commission is hereby established to give my Administration and City Council advice on ways to improve and capitalize on our retirement system’s assets and challenges; and I, Dwight C. Jones, Mayor of the City of Richmond, do hereby set forth to develop a Commission on Pension Liability Asses
Read more
More posts