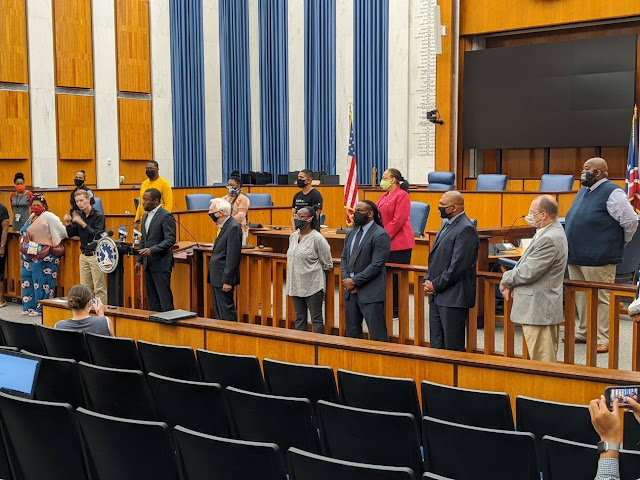 Today Mayor Stoney announced the members of the Task Force to Reimagine Public Safety and outlined his primary requests of the diverse group of professionals. The majority of task force members stood with the mayor for the announcement.

“There is a lot of work ahead of us, but this group’s diversity of expertise and lived experiences is a key asset on our path forward,” said the mayor. “I am thrilled to have this team help our city heal.”

The members of the task force bring an array of perspectives from activist, legal, academic, law enforcement, emergency services, artistic, healthcare and other fields. At the close of a 45-day period, the task force will bring the mayor a set of actionable steps forward to build a safer city for all.

“After additional conversations and review of actions taken in other cities, I do not believe we can wait to begin acting on reform recommendations,” said Mayor Stoney. “I have asked this task force to report back with initial recommendations within 45 days of their first meeting.”

The mayor established three foundational requests of the task force: reviewing the police department’s use of force policies, exploring an approach to public safety that uses a human services lens and prioritizing community healing and engagement.

“We need a new process for noncriminal and nonviolent calls for service, and that will be a top priority for this task force,” noted the mayor. “We must center compassion instead of consequences.”

Regarding community healing and engagement, the mayor said that the task force will allow the city to explore methods of engagement that will enable meaningful change, using his support for the Virginia Black Legislative Caucus’ legislative package as an example.

“Last month I expressed my support for the VBLC’s package for the summer session,” said Mayor Stoney. “This task force can determine where the city can explore complimentary legislation and where we need to focus community advocacy to make statewide change a reality.”

Members of the Task Force

Dr. Lisa Moon, Associate Provost at VCU and former Director of the Center for the Study of the Urban Child

Tracy Paner, Public Defender for the City of Richmond

Rodney Robinson, National Teacher of the Year and teacher at the Richmond Juvenile Detention Center

The Mayor’s Office is specifically working with the Office of Community Wealth Building’s Community Ambassadors to identify additional community members, including youth, to be part of the task force’s important work and to assist with community engagement.

The task force is committed to a transparent process and will make meeting minutes available to the public.