On August 23, at the corner of East Brookland Park Avenue and Dill Avenue, Mayor Jones, Councilwoman Ellen Robertson and others celebrated the newly constructed Six Points Roundabout with a ribbon cutting.

“As we stand here today at this roundabout, I want our residents to know that getting to this point took a lot of hard work, championed by Ellen Robertson along with the Department of Public Works Transportation Engineering Division, who initially applied for the federal grant back in 2009,” said Mayor Jones. “Together, they demonstrated true perseverance with this project, staying in it for the long-haul to make sure this got done.”

“Mayor Jones has been a strong supporter of what goes on in Highland Park in a huge way ever since he became Mayor, and we would like to thank you for that,” said Councilwoman Ellen Robertson, 6th District. “This roundabout is such a wonderful addition to our community in providing safety for both drivers and pedestrians.”

The newly devloped traffic control design is located at the intersections of Brookland Park Boulevard, Meadowbridge Road, 2nd Avenue and Dill Avenue. It includes landscaped islands, pedestrian crosswalk markings, handicap ramps and new signage at each intersection. These enhancements were developed to improve vehicular and pedestrian interaction through slower operating speeds for motorists, and shorter crossing distances for pedestrians. 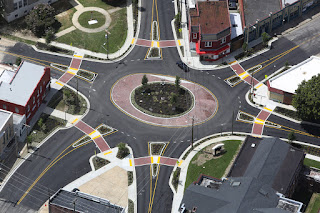