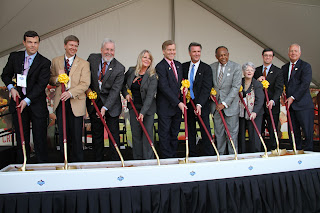 Leaders from the City of Richmond, Bon Secours Virginia Health System and the Washington Redskins, amongst others, will break ground on the Bon Secours Washington Redskins Training Center located at the Leigh Street (Science Museum) site on Thursday, Feb. 14 at 2 p.m.
Virginia Governor Bob McDonnell, Richmond Mayor Dwight C. Jones, Bon Secours Virginia Health System CEO Peter Bernard and Washington Redskins Executive Vice President/General Manager Bruce Allen, amongst other Richmond-based partners, are expected to attend.
“We are honored to gather today with such a prestigious group of partners,” said Peter Bernard, CEO of Bon Secours. “Above all, we are pleased to be on the cusp of a project that will have significant impact on our city, both economically and from a health perspective.”
As the new home of the Redskins three week summer training camp beginning this year, the world-class training facility will bring an estimated $40 million investment to Richmond, in addition to hundreds of new jobs. The economic impact of the camp alone is estimated to be $8.5 million per year.
In addition to enhancing and supporting the city’s economic goals, Bon Secours will bring health-care services and educational programs to Richmond’s underserved areas surrounding the facility, furthering the health system’s long-established Healthy Communities initiative. Healthy Communities focuses activity in Richmond’s East End and Church Hill neighborhoods and will now include communities around Leigh Street. “Today’s groundbreaking further acknowledges the strength of the partnership between the Commonwealth, the City, Bon Secours, and the Washington Redskins,” said Mayor Jones. “This effort will not only stimulate new economic development and jobs, but also generates business expansion all while providing health-care services and education to Richmond residents.”
When camp is not in session, the Bon Secours Washington Redskins Training Center’s playing fields and locker rooms will be made available to the public for youth programs and competitions. The training facility will also house Bon Secours Sports Medicine, rehabilitation services, men’s health, fitness and education programs and movin’ mania, Bon Secours’ Healthy Kids Initiative.
“I look forward to welcoming the Redskins to Richmond this summer. Thanks to a great partnership between the team, Mayor Jones and the City of Richmond, and Bon Secours, the Redskins will have a top-notch practice facility here in Virginia’s capital city,” said Virginia Gov. Bob McDonnell. “This is a win-win for Richmond and Virginia. Through last year’s agreement the Redskins are keeping their corporate headquarters in Loudoun County and their summer training camp in Virginia. This agreement means more jobs in Virginia, more revenue for the state, localities and businesses, and more opportunities for Virginians to see their Redskins in action. Hail to the Redskins, we can’t wait for July.”
Other Richmond-based firms instrumental with the construction, development and engineering of the Bon Secours Washington Redskins Training Center include Hourigan Construction, 3North and the Timmons Group, respectively.
“Today marks a historic day in our franchise’s history,” said Washington Redskins Executive Vice President/General Manager Bruce Allen. “With the leadership of Bon Secours Health System, combined with the support from Governor McDonnell, Mayor Jones and our other outstanding community partners, we begin construction on a world-class facility that will set the standard of excellence for training camp experiences in all of professional sports. The Washington Redskins and our fans are excited to break ground and for camp to commence this summer in Richmond.”
The Bon Secours Washington Redskins Training Center is expected to open doors for camp this summer and is expected to attract more than 100,000 fans.
For more information on the Bon Secours Washington Redskins Training Center, visit www.redskinsrva.bonsecours.com.