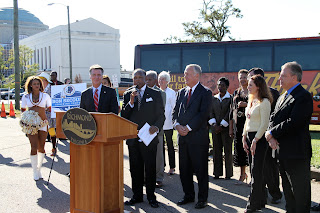 Mayor Dwight C. Jones today announced the city’s plan to develop the Leigh Street (Science Museum) site as the new home of Washington Redskins Summer Training Camp beginning in 2013.  In making the announcement, the Mayor also disclosed that Bon Secours Richmond Health System (BSRHS) and the City have formulated a comprehensive strategy to stimulate new economic development and jobs throughout the city.

“We are announcing an agreement today that has overall merits for the entire city,” said Mayor Dwight C. Jones. “Our efforts have leveraged the world-class opportunity of bringing the Washington Redskins Summer Training Camp to Richmond into an estimated $40 million investment in our city with greatly expanded benefits.”

Components of the Bon Secours Richmond Health System letter of intent include:

·         BSRHS participation will enable the construction of the Redskins practice fields and sports medicine facility at Leigh Street (investment of almost $6.4 million over 10 years).
·         BSRHS will develop a medicine and related use property at the former Westhampton School property site as well as maintain the adjacent football field.
·         BSRHS will develop a medical wellness and fitness center and related use property in the East End adjacent to the Bon Secours Richmond Community Hospital site.

“This agreement, in partnership with Bon Secours and the EDA, places the city in a position to not only build the practice fields and field house for the Redskins, but to generate investment and business expansion throughout the city,” said Mayor Jones.

“Bon Secours is proud to join Mayor Dwight Jones and the City of Richmond in a partnership to bring the Washington Redskins training facilities and camp to Richmond,” said Peter J. Bernard, CEO of the Bon Secours Virginia Health System. “This agreement will allow Bon Secours to significantly expand upon our effort to build healthier communities across Richmond.”

The City will provide BSRHS with a long-term lease for use of the Westhampton School property site. The associated value of being able to develop on that site, without outright buying that site at market value, is being directed to the construction costs of the Washington Redskins practice fields and the development of Richmond Community Hospital in the East End.

“Bon Secours’ relationship with the city and Mayor Jones’ administration has been a long and productive one,” said Bernard. “We have partnered in a variety of ways including revitalization efforts in the East End, particularly along 25th Street, the Nine Mile Road corridor and areas of Church Hill. We view this new opportunity as an extension of our commitment to the city – one that we are extremely excited to begin.”

Bruce Allen, Executive Vice President and General Manager of The Washington Redskins stated, "The Washington Redskins and our fans are excited about the team's summer training camp move to Richmond. We are grateful for the leadership shown by Governor McDonnell, along with Mayor Jones and his relocation steering committee, and want to thank them and Bon Secours Health System for their commitment to building a world-class training facility. We believe our Richmond training camp experience will become the model for all professional sports teams."

The economic impact of the three week summer training camp alone is estimated to be $8.5 million per year.  Development at Leigh Street will also stimulate retail activity in the Fan, Carytown and the Boulevard area and supports the city’s commercial corridor revitalization plans.

The City of Richmond will make a short-term bridge loan to the Economic Development Administration to accomplish the overall Leigh Street transaction. The loan will be paid back to the City through rent and sponsorship dollars that will be collected by the EDA. The EDA will act as the official agent for the Leigh Street site and will lease the facility to the BSRHS for its use, other than during the six-week period when the facility will be for the sole use of the Washington Redskins.

Specifics of the performance agreement and transaction terms are still being finalized. A resolution will be introduced to Richmond City Council tonight expressing the Administration’s and City Council’s support for this development package and the formal papers that will follow. 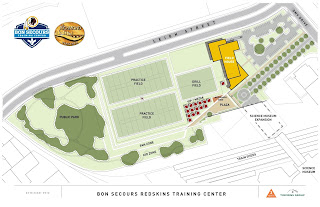 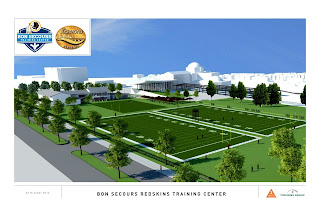 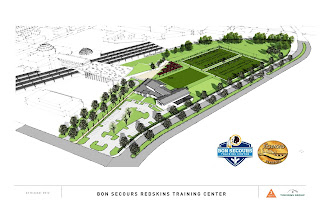