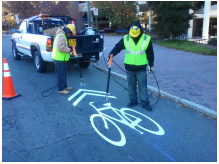 Bicycling in the city is about to become easier and safer for Richmond cyclists. On Saturday the city began installing the first of approximately 80 lane miles of bike sharrows that will be placed along specific corridors in the city. The pilot corridors where the sharrows are being installed include Meadow Street from Broad Street to Cary Street and Harrison Street from Broad Street to Idlewood, representing about three lanes miles of bike

in mixed traffic conditions. The pilot sharrows are located at regular intervals in both directions.

“These marking will remind motorists that the road is shared with cyclists; encourage motorists to pass safely and should reduce wrong-way bicycling,” said Mayor Jones. “The mild weekend weather allowed us to move forward with getting some markings on the ground which helps with a phased-in approach to introducing sharrows in our city as both motorist and cyclists begin to make the adjustment. I am pleased that we can begin creating awareness and understanding of the functions of sharrows in advance of the more widespread installation that will take place in the spring of 2012.”

Sharrows consist of a large chevron and bicycle symbol. From start to finish the project will cost about $775 thousand, with most of the funds coming from the Federal Government grant for